I think my excitement yesterday was keeping me awake. I think around 3pm, I started crashing. My mom was trying to say that she wants to take me shopping, but I kind of just wanted to stay home and sit around. WANTING TO TURN DOWN A SHOPPING PROPOSAL? That's how tired I am. I went anyway.

So what was I so excited about? Yesterday was the JPop Summit Festival in San Francisco's Japantown. Right now, it's going down as the second best day of my life. First would have to be my weekend filled with events with my favorite band, LM.C. Which also happened this year. 2010 is an exciting year. So this is what I wore to the festival. 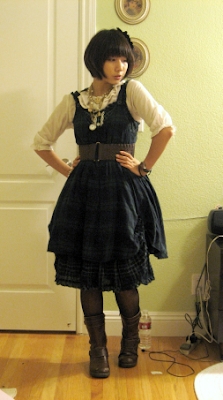 Luckily, my hair was behaving a little bit better, after that bad hair week. I hadn't completely planned out what I wanted to do at the festival, but it went without saying that I had to be there early to buy a t-shirt so I could get into the autograph signing for Mori Chack. I spent all of Friday making stickers for him. 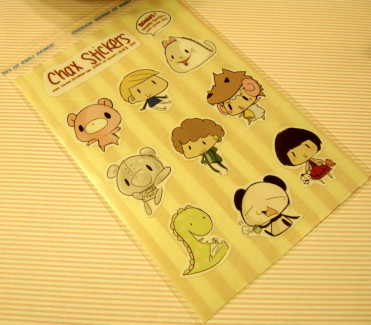 The bottom three are my characters (actually that last one is me). I was really happy because I spotted him before the Q&A panel, and got to go to him and hand it to him directly. I was kind of sort of freaking out. After I gave it to him, I asked for a picture, which he agreed to. And just that moment, the announcer for the panel started to talk (and then I get kicked out and he tells me to find him later). Thank you, life. I should have approached him earlier.

I'm going to backtrack a little bit. I arrived at the building along with Tiffany and Olivia at around 10 or 10:30 or so. Baby the Stars Shine Bright was having a lucky pack sale, but I was told that they didn't have enough to get to me. So wasn't able to get one. This was the line. 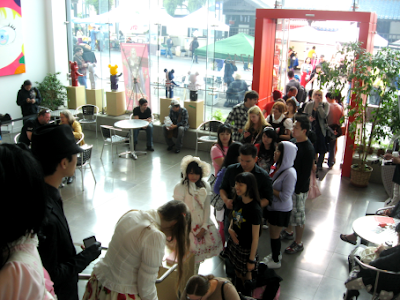 I was stressing because I'd been lining up for the Gloomy Bear t shirts, and I was lining up here too. So I had to run back and forth and have people hold my place in line. I didn't get the pack, but at least I got my t-shirt. Here it is! 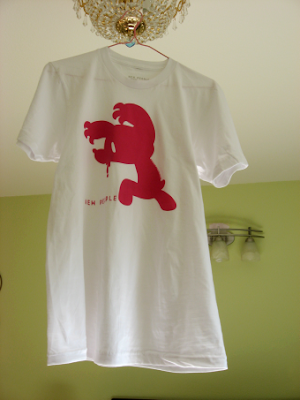 The text on the shirt says "New People," the name of the building. I was afraid that I wouldn't like the shirt, but I'm glad to say that I do quite like it. I took a really long time to choose a size, because there were so many sizes. There were both mens/unisex shirts and women's sizes. But the women's sizes looked really small, so I was afraid to get one. I bought a men's small, it it fits pretty well, luckily.

I met a ton of coolkids yesterday, but I was a mix of too lazy to get my camera out and too shy to ask people for pictures. I did manage to get a picture with Yuka though. She's the shop girl for 6% Dokidoki 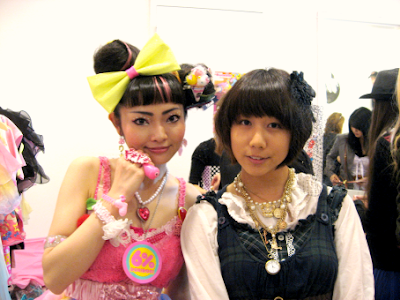 I bought two bow clips there. The clips were only about five bucks last year, but because of how bad the dollar is doing, the prices raised to a surprisingly inflated sum of $8. Three dollar difference! But I bought them anyway.

On the second floor, I spent maybe half my life shopping at Black Peace Now. There's so many things I wanted to try, but I was too lazy to try them on because my outfit takes 5 minutes to take off and 5 minutes to put on. It's a hassle, really. I could have worn jeans and a t shirt, but no. I ended up buying this glittery black tank, and promised myself that I'd go back to buy this dress I wanted. WHICH I REALLY WAS GOING TO DO. But I ran out of time and my dad convinced me that we really needed to go. I can't go back for it because they're supposedly getting rid of it today. At least that's what the shop guy said. 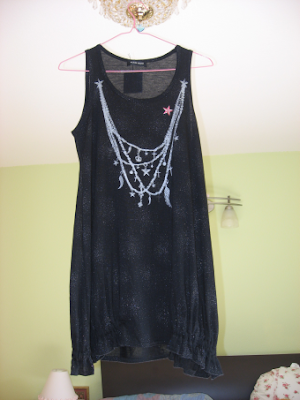 WAIT HERE'S THE BEST PART OF THE DAY 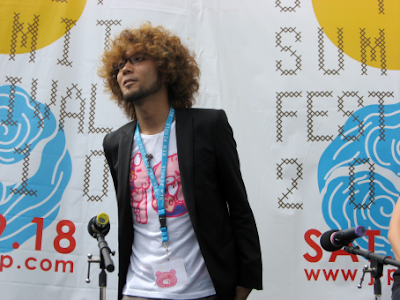 MORI CHACK MORI CHACK! The only reason I can't fangirl over this guy is because he's 20 years older than me and that makes him over twice as old as I am. Yeah. Pitty. He says he's not into fashion, but I feel like he always dresses well. Man blazer! He was wearing metallic silver shoes too. I got a number of pictures at the panel, since I was standing right in front of him. My mom was also taking pictures, apparently. Here's one of the back of my head. And Tiff's, on the left. 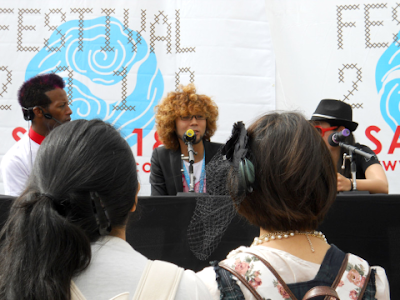 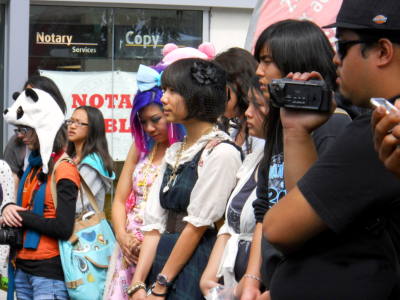 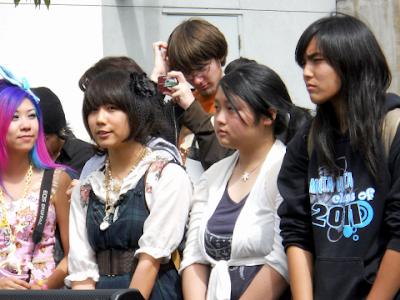 That girl next to me is a coolkid. She was wearing a Podolly dress.

There weren't really any particularly interesting questions asked. Mostly stuff that Gloomy Bear fans probably already knew. After the Q&A, we went strolling around the vendors to see what they have. There were so many shops that I didn't get to look at, because I have a habit of staying one place for a long time. I should have speed shopped- I didn't know my time was so limited. There's one regret.

The autograph signing with Mori Chack was supposed to start at 2:00, which was when I got there. I hadn't been anticipating a long line. But that was exactly what happened. More linnessss. Tiff and Olivia and I waited for a good 2 hours in line. It took a long time because each person in line had the opportunity to chat with Mori Chack a little bit and get their t-shirt or whatever else they brought in not only signed, but drawn on. He drew Gloomy on everything he signed, and personalized it by asking for each individual's name. 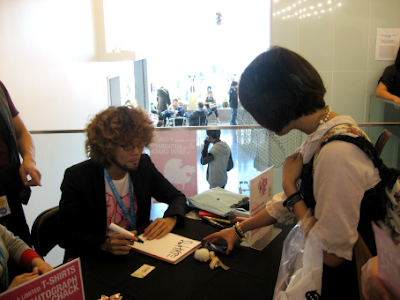 I was afraid he wouldn't take me up on my offer, but he did. I asked him to draw me my original character, Connor. I had a reference picture on my phone (which was drawn by Jeff Thomas, also known as Azuzephre, creator of Pon and Zi). 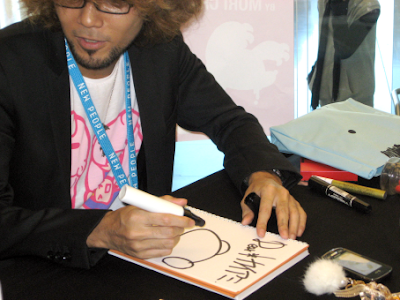 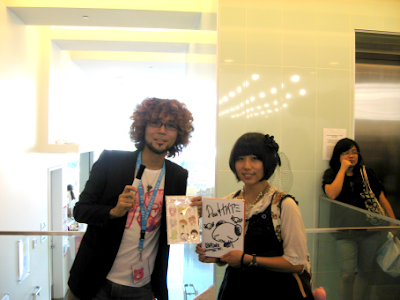 Here's us with the autograph! The pen that he was using was drying out by the time he got to me, but it turned out well. He remembered me from before, and brought out the stickers that I made! 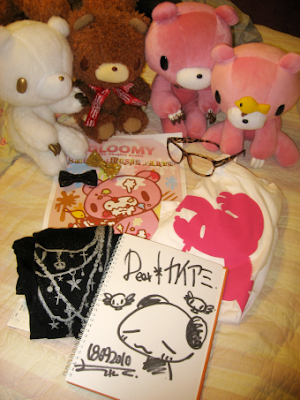 He wrote "dear Kaiami" on the picture. I love how easygoing the staff was. There was this poster hanging on the table cloth that I wanted, and they let me keep it when I asked for it. Score!

Yeah, so that was my second best day ever. It wasn't enough time. Too short! I didn't finish shopping. Not even close. And we spent about half the time we were there standing in some kind of line.

There was an ice cream party with Mori Chack today, but I couldn't attend. One, because it costs $65 for a pass in. Second, because I went to SF yesterday, and I have no transportation there again because my father refuses to take me again (I don't drive, so I can't even drive myself to the train station). I hope Mori Chack will visit us in California again. One day's not enough. He really is a genuinely nice guy.

I love your outfit! So cute. :) That whole day looks like so much fun.

I saw your blog on one of the IFB group threads so I wanted to come by and say hi! :)

I love your outfit, it's amazing. Love the volume.

Looking as gorgeous as ever, hmm!
You're always sooo pretty...! and such an adorable style; I love reading your blog, you're quite adorable!

I'm glad to see you had such a great time c:

Courtney and Puck: Thank you for visiting!
Orphin: Oh, thank you~ I'm always happy when you comment