I got a Halloween pack of Dum Dums and Sour Patch/Swedish Fish to pass out for Halloween. My mom lets me choose which kind to get, so it would be alright if we have leftovers. But the thing is, we always overbuy. There hasn't been a year where we've gotten enough visitors for all of the candy to be passed out. Occasionally, we'd run out of candy, but only when we leave the candy bowl outside (meaning it's probably just one group of people who take them all). 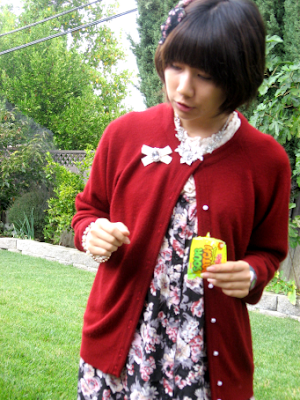 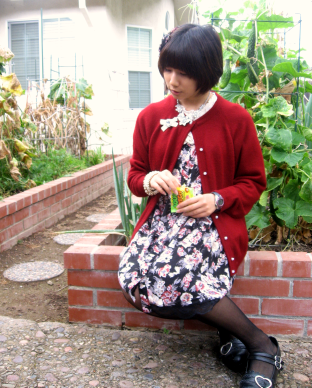 I don't need to go trick or treating to get a month's worth of candy. About this year's Halloween. I haven't put much thought into it. Every year, I do end up wearing something, but I don't usually plan it out. If nothing comes to mind, I'll wear what I wore last year. The thing is, I'd rather be warm than wear a really awesome costume that I'd be cold in.
Lighting inside the house was way too dark today, so I went outside. In most of my photos, the focus is the background and I'm sort of blurred out. Either that or the photo turns out overly blindingly bright. 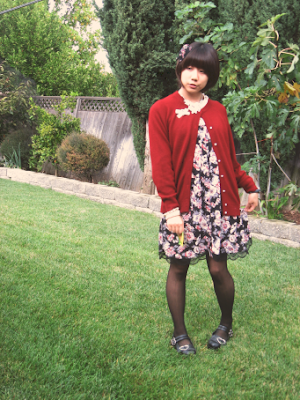 dress: target. cardigan: thrifted. tights: free from library donation. shoes: bodyline
I'm wearing a bow that goes with the dress today, but I guess I'm facing the wrong way in all of the pictures. Oops. Taking pictures is really dangerous for my camera. Since I don't have a tripod, I place the camera vertically on the step ladder. But the sides of the camera aren't flat surfaces, so it could fall and break at any time. It's fallen a number of times before, but I have something to cushion the blow. Still, a tripod would be nice.

I want to go shopping in Korea.
Love, Kai
Posted by Kaiami at 9:04 PM

I get mistaken for a preteen girl, too(-_-). I love your cardigan. I would wear it with a long sequin dress though. Which is Christmas-y, but I like to blind people when I walk down the street,because everyone here, in NY, dresses very muted.

Your so cute!(Sorry had to be said) I got away with kids eat free in pizza hut so I guess I look 12! great blog :)

Bunny: I love sequins! I'd like to buy a sequined cardigan or scarf, or a pair of sequined shoes sometime soon. I'd very much like to visit NY. The last time I was there was 17 years ago, and my parents aren't keen on going back.

SophieGrace: Thank you! Hahaha that certainly is a perk. Buffets are one place I wouldn't mind using kids price for, considering the amount of food I take. A bowl of soup and a salad is enough to fill me up.