why yes, my hair did grow a foot overnight.

There's one particular question I've never quite understood. After getting a hair cut, people have the tendency to ask something in the lines of "did you get a haircut?" It makes sense if only a couple inches was trimmed off, but people ask even when it's obvious. 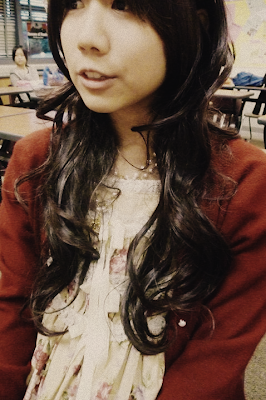 today's photos courtesy of Maykoko
I wore a wig on Friday, and I lost count of how many "is that your real hair?" questions I received. It comes in different variations. "Is it real?" being the most popular. There were also "did your hair look like that yesterday?" and "are those extensions?" A teacher of mine didn't even notice that I used to have short hair. I guess that's possible.

I used to have chest-length hair, and cut it above-chin length. My older brother never said anything about it, until three weeks after I cut it. OH YOU GOT A HAIRCUT. Three weeks later. I didn't notice.

Thursday night, I was deciding what to wear for dress-up-for-Halloween day. I was going to go as red riding hood again, but I couldn't find my red hood so that kind of knocks down the idea. I narrowed down to these two dresses. 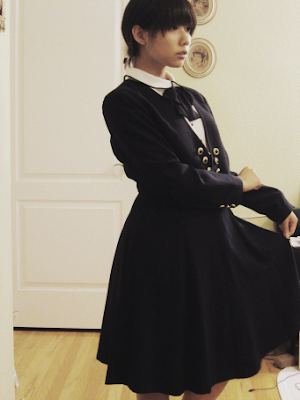 dress: present from my friend's cousin in Japan 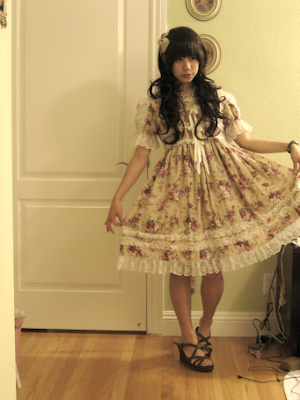 Cabin crew lady. Except I was missing a hat and a lapel and nice shoes. And I though maybe it would be a bad idea to lug around a suitcase at school. So I went with the second one. I was afraid it would be too cold though. 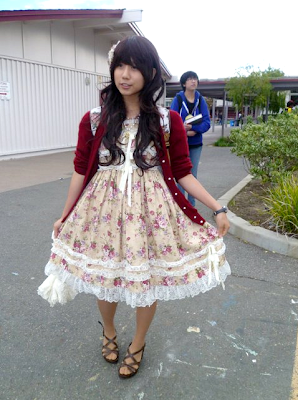 But I found a pair of tights and a cardigan to go with it, so it wasn't too cold. The forecast predicted rain, so I brought a collapsible parasol too. That's my friend in the background. 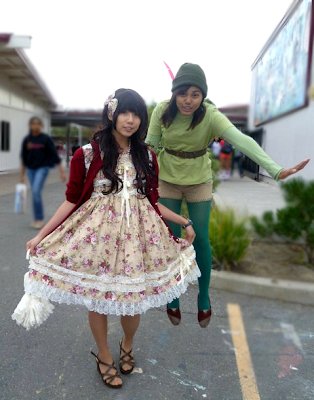 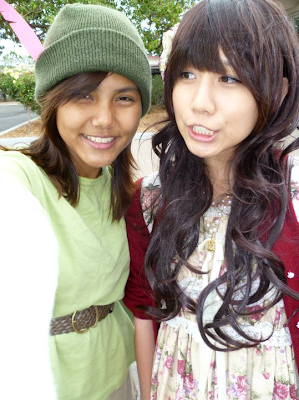 My friend Maykoko took these pictures. She went as Peter Pan, and spent the whole day jumping and doing crazy magic.

You look adorable. Haha, i have short hair too and yeah it's quite irritating when people ask me that.

Both of those dresses rock my socks off too btw! I'm really loving your wig as well. I'm actually looking into getting one... I think I know where I'm going to get it - I found a place online that makes really gorgeous Kanekalon ones - but do you have any good recommendations? I'd love to know where you got your's! :}

Oh, Coco, you're too sweet. And right back at'cha! I love your blog and your style

I really wish I could help, but I'm sort of a wig newbie. I bought it from a seller on livejournal, and it as listed as "Kanekalon wig," and that's all I know about it. I can assure you that Kanekalon wigs are very nice, though!

Haha its okay... I just appreciate the reassurance on the Kanekalon wigs! I've been trying to find out just how good of quality they are, but I guess there are very few people (at least here in the US) who are well-versed in the wig department, especially cosplay ones.

I'm excited about getting mine though! Luckily I found a store that makes some really pretty, natural colored ones, and they look pretty darn real! I can't wait to get it! :D